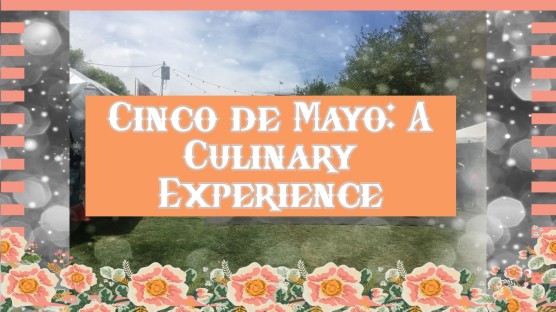 You know what festival Star and I really enjoy? The annual Cinco De Mayo festival. We appreciate the food, the atmosphere, and I personally enjoy explaining to people why Cinco de Mayo is NOT Mexican independence day but why it actually is pretty important to Mexican-American culture. I love being able to spend a day celebrating my culture, and of course, eating ALL the delicious food—which is exactly what Star and I do every year. So today I thought I’d share a few of my favorite things we indulged on. It was all mouthwateringly good. 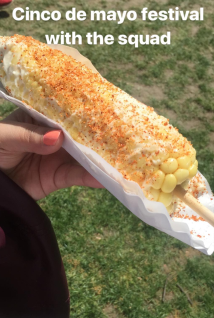 One of my absolute favorite festival foods. I’m a corn girl. I LOVE corn on the cobb, and for me the best kind of corn has always been in the form of elotes. The combination of mayonnaise, crema, cheese, and chili is just perfect. It’s a wonderful savory dish with just enough flavor from the chili but no truly lasting heat. Plus eating it on a stick makes it easy to walk around with! I personally also like to give it a spritz of lime if I get the chance. We also indulged in esquites, which is essentially the same thing as elotes, though it is served in a cup instead of on the cobb. If you love corn (and aren’t lactose intolerant) this is something I definitely recommend. The crispness of the fresh corn is also super heavenly.

First off, if you’ve never enjoyed an Agua Fresca on a hot day, do so immediately. The

careful combination of juice with water and sugar is usually just perfect. Never too sweet, and always so good. This year I enjoyed a mango one that had a really well -rounded flavor. It wasn’t artificially flavored so it didn’t have a vitamin-like quality. Instead, it was a perfect harmony of sweet and just ever so sour (but not enough to ruin the sweetness). It also wasn’t bogged down by ice, but it was still cold when served but it never got too watery since there was nothing to melt. Truly, it was what I needed on a hot day.

Or as many would probably say—street tacos. Which to me just means tacos. I had a carne asada (beef) taco and one of our other friends had a pollo (chicken) one. Both were very good. The meat was delicious and there was a generous amount of it. It was topped with only cilantro and onion, which is literally the only thing I put on tacos so it was perfect to me. Like elotes, I gave it a spritz of lime as well as put a healthy amount of salsa. The salsa I used on my tacos was definitely on the spicy side, but it wasn’t too bad. More than anything it was extremely flavorful and while it made the tacos a little messy to eat, they were delicious. Oh! Plus the tortilla was actually really good. Not only did it hold up well, but it also didn’t have the often grainy texture of a storebought tortilla. This dish was an all around A+

Technically another agua fresca, Horchata is both one of mine, and Star’s, FAVORITE

drinks. Honestly, any time we go to a Mexican restaurant that has horchata, we WILL order it. It’s big palette teasers are rice and cinnamon. It’s non-dairy which is perfect for Star and it’s filled with cinnamon which is pretty much all I ever dream about. This horchata in particular probably could’ve used some more cinnamon, but it was perfect on the sweetness scale. And again, like the mango agua fresca it’s extremely refreshing when it’s hot out.

I live for this. It’s a perfect combination of fresh fruit and chamoy sauce. Which really just means the perfect combination of sweet and spicy. I really wish I could explain the flavor of chamoy sauce in a profound way….but I can’t. Just know that it’s like fruity and spicy and tangy and it goes well with a bunch of different fruit. I crave fruit with chamoy sauce on it as well as fruit with tajín sauce on it CONSTANTLY. But I rarely get to eat it due to lack of having places to buy tajín and chamoy. So basically, I but this every chance I get.

Lastly, we have the churro. I know it seems so cliche to have a churro for Cinco de mayo,

but I don’t often have them. In fact, the last time I had a good churro was probably last year’s cinco de mayo. I don’t often buy them from other shops or fairs because they often are far too sweet and crispy. Which is what made this churro so great. It wasn’t humongous and it wasn’t overly sweet. It was soft and doughy inside, which most churros end up too stiff. It was honestly a churro that was worthy of the name.  I ate mine and immediately wanted another…but the line was too long to wait in again (also it was only two dollars).

We also snacked on a bunch of other dishes, such as quesadillas and nachos, but they were pretty standard and nothing to call home about. Overall we had a super great day with our friends. We ate lots of good food, enjoyed some wonderful music, walked around and looked at vendors, and had a really lovely time.

Til our next food adventure!

Creative duo | Screenplay writers | Cosplayers | Content Creators | We are proud confident Otakus that demystify weeb culture and encourage others to live their best weeb life. View all posts by y0uc4n7kn0w